Diabetes Takes a Toll on Women 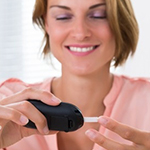 (HealthDay News) — Diabetes may be harder on women’s hearts than it is on men’s.

Two new studies have found an increased risk of heart problems, such as heart attack and chest pain, in women with diabetes compared to men with the blood sugar disorder. In one of the studies — a review that included almost 11 million people — the risk was about 40 percent higher.

“We should avoid sexual prejudice in cardiovascular disease, take all necessary steps to diagnose it early, and control risk factors comprehensively to guarantee the most suitable treatments and best possible outcomes in female patients,” wrote study author Dr. Xue Dong, of the Affiliated ZhongDa Hospital of Southeast University in Nanjing, China and colleagues.

However, it’s important to note that both studies could only find an association between diabetes and a higher risk of heart disease in women than men. Neither study was designed to prove a cause-and-effect relationship.

Diabetes is a known risk factor for heart troubles. But, it hasn’t been clear if the heart risk is greater for women or men, the Chinese researchers said.

Dong and colleagues reviewed 19 previously conducted studies done between 1966 and 2014. Combined, the studies had nearly 11 million people from North America, Europe and Asia. Among these people, more than 106,000 fatal or non-fatal heart attacks or chest pain (angina) events occurred, the study said.

The second study included data from hospitals across the Tuscan region of Italy. The information was collected between 2005 and 2012. The study included more than 3 million people, the researchers said. Forty-seven percent were male.

The study found a similar risk for congestive heart failure or stroke in people with diabetes of both sexes.

Neither group of researchers offered possible explanations as to why these gender differences might exist.

And neither study specified whether the participants had type 1 or type 2 diabetes, although the vast majority of cases are type 2.

Both studies were scheduled to be presented at the European Association for the Study of Diabetes, in Stockholm, Sweden. Findings presented at meetings are generally viewed as preliminary until they’ve been published in a peer-reviewed journal.

So easy you don't have to miss any of the party.

Genius Central and Health Hut. All rights reserved. This internet site is hosted by Genius Central, a Web site service provider to natural health stores nationwide. Genius Central and Health Hut have no means of independently evaluating the safety or functionality of the products offered by their suppliers and affiliates and thus can neither endorse nor recommend products. Information presented is of a general nature for educational and informational purposes only. Statements about products and health conditions have not been evaluated by the US Food and Drug Administration. Products and information presented herein are not intended to diagnose, treat, cure, or prevent disease. If you have any concerns about your own health, you should always consult with a physician or other healthcare professional. Your use of this site indicates your agreement to be bound by our Terms and Conditions